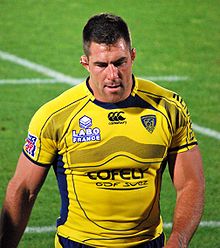 Former Canadian international, Jamie Cudmore has called former club Clermont to face summary court proceedings over being forced to play despite displaying what could have been symptoms of concussion.

Cudmore, who played for the current Top 14 champions from 2005-16, has asked for medical expertise to decide if he was the victim of two concussions and if he was fit to go back on to the pitch.

“Mr Cudmore wanted to wait until the Top 14 final had taken place before acting,” said his lawyers in an official statement. “This is not an adversarial procedure. His sole motivation is the welfare of players.”

Cudmore argues that in the European Cup semi-final against Saracens in April 2015, he failed the concussion protocol tests but was forced to play on because of injury to one of his team-mates.

Two weeks later, the Canadian suffered another head knock in the European Cup final against Toulon, but once again continued playing.

Clermont reacted by saying: “It is not, as has been mentioned, a ‘complaint against the club’, but merely a procedure aimed at soliciting a medical opinion.

“ASM Clermont Auvergne will make transparent all factual and objective elements that the designated expert could ask for,” the club was reported to have said, adding that the player then went on to compete in the 2015 World Cup and sign a two-year contract with Oyonnax.

“The problem of concussions, which have been much debated recently in rugby, is not a new concern for the club. For years, Clermont has been working on the issue and is at the forefront of innovation in that field.”